You may recall that a baby crane was injured right outside of EHCG a few weeks ago. We have received an update on his welfare from Patrick Comfert with Public Health-Madison and Dane County! Patrick's message and photos are below. 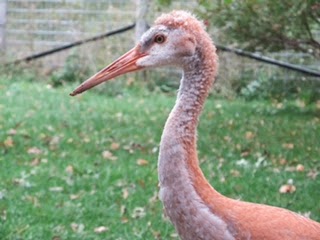 "He is doing very well and both his wing and his leg have gotten much better.  His leg is 100% better.
His wing still hangs a little but he is able to hold it up and this week even started flapping and practice flying. 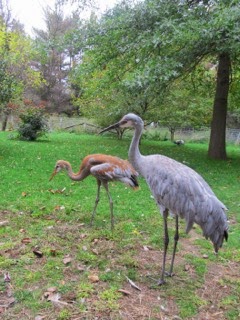 We are calling him “Watashi” (male in Japanese) not sure he is a boy but very adventuresome and into everything so it was a reasonable guess. He is VERY attached to the foster crane “BG” and they are together 24 hours a day.  The eat, forage, bathe, and sleep together.   BG still feeds the Watashi about half the time even though the younger bird is more than able to feed himself. They talk back and forth to one another constantly. And when Watashi needed to be caught or handled for a bandage change BG would come running to his distress noises and peck us trying to save his young charge.

Nothing was broken in the accident but he had suffered trauma to his left leg and wing.   At first he couldn’t bear weight on his  leg limped quite badly but it healed quickly within a week or two he was walking strong.

His wing was a different matter. One of the joints was slightly dislocated and there was quite a bit of nerve and/or muscle trauma. He was unable to hold it up in a normal position and it would hang limply at his side. Also 90 percent of his flight feathers were pulled out of that wing in the accident and we were not sure if they would grow back in or not. 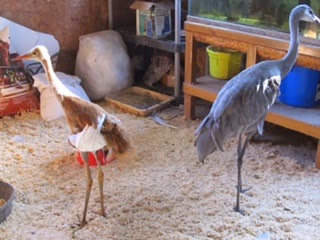 His wing was x rayed to make sure nothing was broken and was then wrapped in a figure 8 bandage to keep it from hanging and was wrapped in such a way as it was next to his body in a natural way. He did not like this one bit and worked day and night with his beak to get the wraps off his wing. Many nights he was successful and I would find an hours worth of fancy wing wrapping in a tangled pile on the floor the next morning and a droopy wing crane standing there saying.. HAH  You thought that was going to stay on ME? No way buster! 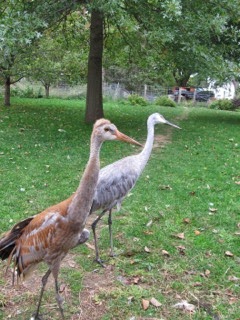 In the end I used my bigger brain and found a way to keep his wing bandaged where it needed to be.

Slowly muscle control returned to the injured wing and he was able to hold it up in an almost natural position but with some droop.  (which remains)

As of the first of October he started flapping both wings, (formerly only flapped the right one)   and has even tried running and flying short distances. J     Because of the wing droop he tends to go sideways a little bit when he flys so at this point he would still not be able to survive in the wild.   But keeping our fingers crossed.

We at EHCG are very happy to hear that the baby crane Watashi is doing better! 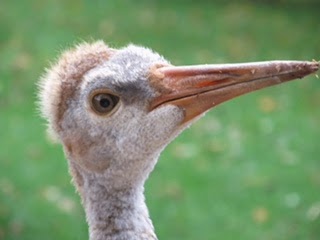 Posted by Eagle Heights Community Garden at 11:33 AM